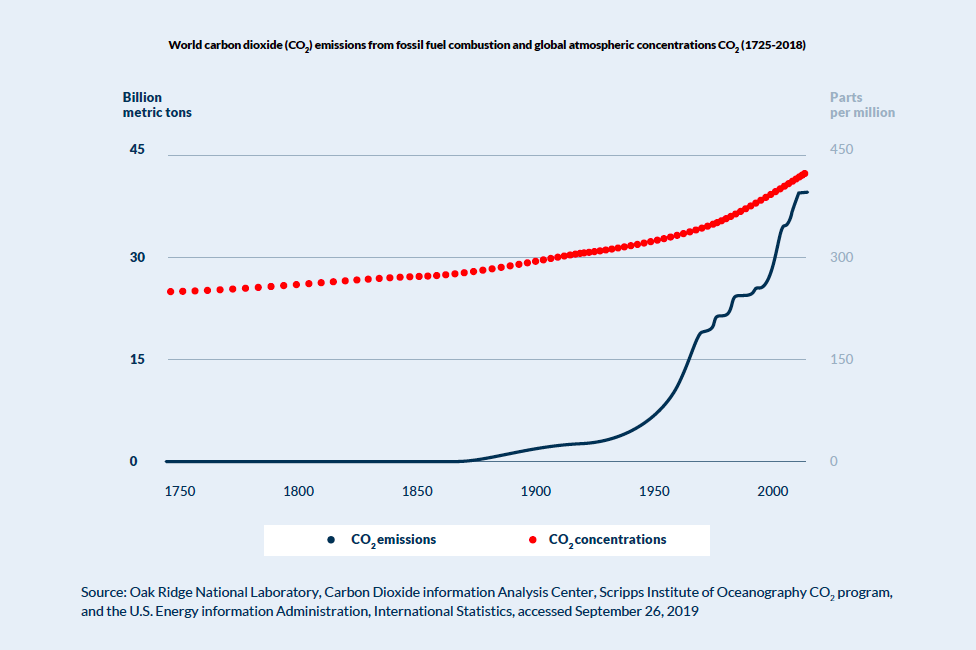 In this new and accelerated era, nations often just think about how they can increase hydrocarbon production for both refined and raw products, but are they really looking at the whole picture – and the  climate change consequences? Honestly, despite all efforts made through the Kyoto Protocol and the ongoing promotion of renewable energies, it is still not yet enough. We are far from setting effective controls.

Harmful greenhouse gas emissions resulting from human activity have increased substantially since large-scale industrialization began in the mid-1800s. Most of these human-caused emissions were carbon dioxide (CO2) from burning fossil fuels.

Atmospheric CO2 levels are naturally regulated by the many processes that form the global carbon cycle. Natural processes, such as plant photosynthesis, are primarily responsible for moving carbon between the atmosphere and the earth’s land and oceans. Although these processes can absorb some of the CO2 emissions produced each year (measured in carbon equivalent terms), starting in about 1950, CO2 emissions began exceeding these processes’ collective capacity to absorb carbon.

The imbalance produced by the rise in CO2 emissions, the main component of greenhouse gases, has generated an excess in the atmosphere, which contributes to global warming.

The emissions from fossil fuel combustion have grown exponentially, producing an increase in the planet’s average temperature. Rising temperatures may cause changes in precipitation patterns, storm severity, and sea levels, forming what we call “Climate Change.” Based on U.S. Energy Information Administration (EIA) reports, there were about 350 billion metric tons of CO2 emissions in 2019.

According to the Intergovernmental Panel on Climate Change (IPCC), the earth’s temperature rose about 0.85 degrees Centigrade (1.53 degrees Fahrenheit) between 1880 and 2012. The report also states that “human influence has been detected in warming of the atmosphere and the ocean, in changes in the global water cycle, in reductions in snow and ice, in global mean sea level rise, and in changes in some climate extremes. It is extremely likely that human influence has been the dominant cause of the observed warming since the mid-20th century.”

Nakasawa Resources, as a dynamic, modern, and environmentally conscious service company, is committed to helping mitigate CO2 emissions by implementing constant innovations and using high-end technology in our products and solutions. With our latest, innovative technologies Super Matroid Heater and Super Matroid Cyclone helps contain the negative impact of conventional OTSGs, through the exhaustive control of combustion gas emissions.  This will help us achieve a low-carbon future.